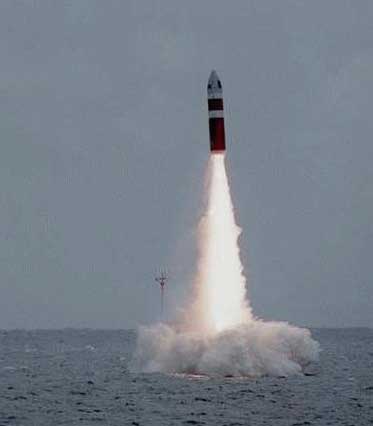 The Strathclyde Pension Fund, one of the biggest local authority pension funds in the world, with net assets of more than £13.9 billion, has been exposed for having investments worth £83 million in 11 of the world’s 20 biggest arms manufacturers.

The Glasgow City Council-administered fund is Scotland’s largest local authority pension scheme and pays 70,000 pensioners with a further 130,000 members either paying into the fund or waiting to retire.

It pools from 12 local authorities, including Glasgow, from the former Strathclyde area, plus over 200 other large and small employers.

But according to new research carried out by the Stockholm International Peace Research Institute, the fund has had shares worth £19.6 million, as of December last year, in Lockheed Martin, the manufacturer of Trident nuclear weapons (pictured), and Boeing.

The pair are the top two arms-producing and military services companies in the world.

The research institute also found that firms receiving SPF investment that also feature in the league table of the world’s top 20 arms producers in terms of sales also include Safran (£17.2 million), Honeywell (£16.4 million), United Technologies (£7.1 million) and Raytheon (£2.3 million) which has an arms manufacturing plant in Glenrothes.

Lockheed Martin also offers IT services and in 2013 took over a Scottish Government e-procurement contract worth £18.5m.

In January last year it emerged via figures obtained under freedom of information legislation that Dumfries and Galloway and Shetland were the only two Scottish councils that administer pension schemes with no involvement in tobacco or companies selling arms.

A Glasgow City Council spokesman said while it employs the staff and its committee tends to be made up of Glasgow-elected members, the SPF has its own committee structure and governance which is responsible for investment strategy. He said the council cannot make decisions for the fund.

He added: “The fund is a signatory to and active participant in the United Nations Principles for Responsible Investment - and we have appointed independent monitors to ensure these principles are adhered to by our investment managers.

“We take our social responsibilities seriously and are recognised as a fund that is showing leadership both nationally and internationally in actively engaging with the companies in which we invest to challenge them to address risks and improve performance.”

Commenting on the revelations, anti-arms trade campaigner andIndependent Highlands and Islands MSP John Finnie called for change across the board.

He said: “If there is any set of rules that says it is acceptable to be investing in these arms companies then we need to look at the rules,” he said. “The public look for moral leadership in the public sector and sadly that is not always obvious.”