Scottish EDGE launches an out of this world funding round

Business funding contest Scottish Edge has launched its latest round by sending a custom-designed trophy to the edge of space. 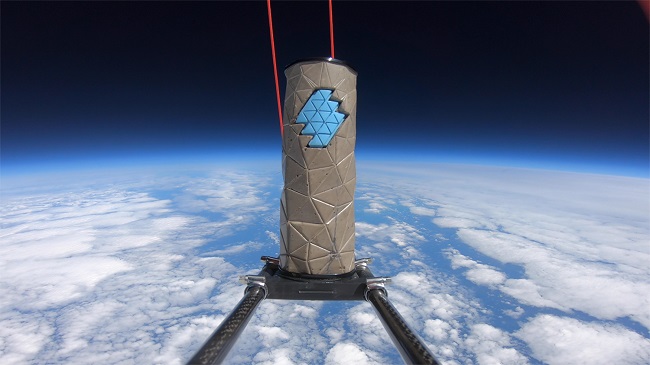 Timed to pay homage to the 50th anniversary of the Apollo 11 Moon Landing and represent the forward-thinking ideas that the competition aims to attract, Scottish EDGE, with its strong focus on innovation and technological advances, collaborated with previous finalist, the near-space education and technology company Stratonauts, to bring its “EDGE of Space” campaign to life.

Taking-off from the outskirts of the Scottish borders, the trophy and its capsule ascended to a maximum altitude of over 100,000ft with the aid of a helium filled weather balloon, and battled -60 degree celsius temperatures, 150mph winds, and speeds of over 190mph.

Spending approximately two hours in its near space environment, the trophy returned to Earth 42 miles from the launch site, landing in the Lammermuir Hills and bringing with it stunning views of Earth from the stratosphere thanks to the capsule’s onboard cameras. The undertaking also yielded valuable scientific data for Stratonauts’ research division.

Keen to represent the multi-collaborative nature with which Scottish EDGE was established and continues to operate, the trophy was designed by Glasgow School of Art student Corrie Grant and product design agency Fearsome, and pupils from Aileymill Primary School in Greenock contributed to the capsule construction as part of space exploration workshops run by the Stratonauts team.

Scottish EDGE CEO, Evelyn McDonald said: “With our ideals aligning so strongly with the current very topical issues of innovation, human achievement and exploration of the unknown, we chose to launch this latest round of Scottish EDGE in a very literal sense. We’re delighted to have embarked on this journey to a place known only to a small number, the Edge of Space.

“We are confident that over the next six weeks we’ll see even more of the great out of this world thinking that we’ve now become accustomed to during our application phase. I wish everyone applying to Scottish EDGE Round 15 the very best of luck and I can’t wait to help support the winners in achieving astronomical success.”

Stratonauts co-founder, Lewis Campbell said: “We were absolutely delighted to make Scottish EDGE’s vision of taking their campaign higher than any campaign has gone before a reality. The mission was a fantastic opportunity to achieve several goals for both Scottish EDGE and Stratonauts: to inspire the next generation of entrepreneurs and young future space explorers alike, to go one step further forward in making Space exploration commonplace in society and to align the best of Scotland’s future businesses with the rapidly growing Space Sector in Scotland.”

Awards of up to £150,000 will be on offer to the successful applicants of Round 15, which opens for application today, from a collective prize pot of over £1 million. Throughout its past 14 rounds, Scottish EDGE has awarded over £14 million to startup businesses across Scotland, with an alumni roster which boasts the likes of Callum Smeaton of TV Squared, Leah Hutcheson of Appointedd, and Michael Corrigan of Trtl.

Applications to Round 15 will be accepted through the competition online portal until 4th September, 2019 at 2pm, requiring a completed digital application and a short video pitch.