Business confidence in Scotland falls back into negative territory

Business confidence in Scotland has returned to negative territory, a survey by chartered accountancy body ICAEW has found. 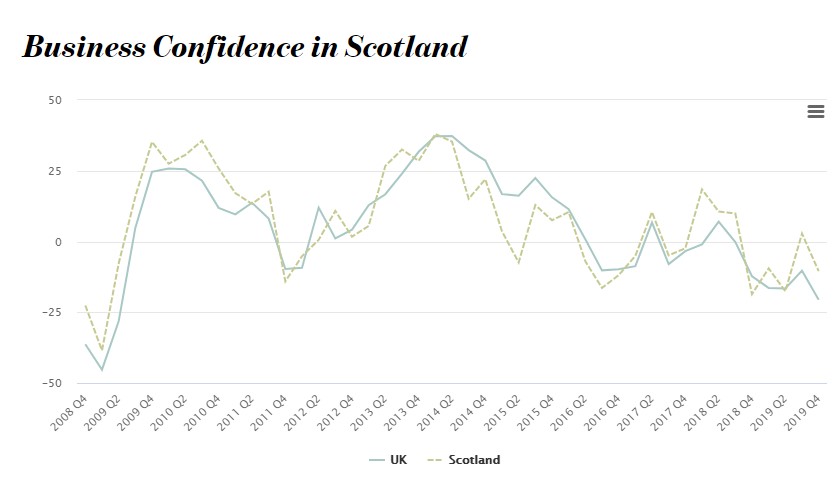 While firmly negative confidence in Scotland is above the UK average, the latest ICAEW Business Confidence Monitor shows.

Scottish businesses report slowing sales and profits growth as well as limited improvements in productivity, while Brexit uncertainty and the global economic slowdown are also likely to be having an impact.

Scottish businesses reported that staffing is an increasing issue for them: 30% cited the availability of non-management skills as a growing concern, and 27% reported staff turnover as a growing challenge. This is higher than the UK average, which stands at 21% and 23% respectively.

David Bond, ICAEW Scotland director, said: “It is disappointing but not unexpected that business confidence has fallen back into negative territory this quarter, with ongoing uncertainty on issues such as Brexit likely to have had an impact. We hope that the new UK government will ease the strain on businesses and bring some much-needed stability to the economy.

Against such a backdrop, it’s no real surprise that those in work are often reluctant to switch jobs as freely as they might otherwise be. In addition, Scotland’s workforce is partly drawn – at all levels – from the rest of the UK and beyond, again any degree of uncertainty will impact on that availability.”

Concerns surrounding sales performance are likely to be impacting on confidence among businesses in Scotland – domestic sales growth is just 3.0%, down from 3.5% a year ago, while exports are expanding at a slower pace (2.5%) than they were 12 months ago, when they stood at 3.8%.

These difficulties in sales growth could in part reflect a lack of competitiveness, which may possibly stem from limited productivity gains. In Q4 2019, only 28% of companies in Scotland reported an increase in productivity, a significantly lower rate than the UK average of 39%.

Businesses in Scotland seem to be trying to address limited productivity progress by increasing their rates of investment, the BCM suggests.

Research and development (R&D) budgets are up by 3.7% in Q4 2019. This is one of the fastest rates in the UK and continues a recent trend of relatively strong spending growth when compared to the UK average.

This is supported by the latest HMRC data, which show a significant rise in R&D tax credit claims across Scotland. Capital investment growth has also been fairly stable in the past year, at around 2.0%.

Over the year to Q4 2020, domestic sales (4.7%) growth is expected to improve, with a faster rise in profits also projected at 4.8%. However, businesses anticipate no significant change in export performance, with expected growth of 2.8% over the next year.

Capital investment is expected to increase at a marginally lower rate than in the past year, at 1.8%.

R&D expenditure is also set to rise more slowly over the next 12 months at 2.6%.

Nonetheless, these forecasts for investment spending are still among the strongest across the UK.